Compared to the Metro, the tram in Amsterdam has a much denser network of lines and stops. The tram is operated by the municipal company GVB which also operates the other mass transit options, Metro, city buses, and ferries.

The blue and white trams are a good option for traveling from the central train station (Centraal Station) to downtown as well as the various districts of Amsterdam.

The tram network has been expanding since 1875 and nowadays encompasses 15 lines and approximately 200 km of rail lines.

The tram in Amsterdam has a dense network of lines and stops. (picture: www.travelguide.amsterdam)

Tips for passengers & sightseeing via the tram

Tickets for the public transport system in Amsterdam:
Which ticket option is best for me?

Whether single ride via e-purse, also referred to as OV-card, all-day ticket, “I Amsterdam Card”, or “Amsterdam Travel Card”, you will find detailed information for all, as well as current fares here.

It allows you to quickly and easily find the right ticket option for your stay in Amsterdam. Researching all options upfront and knowing which ticket option works best for you, will save you money and time after arrival and prevent stressful situations.

Our advice for when you are in a hurry – when you don’t want to deal with the tariff system and ticket machines: 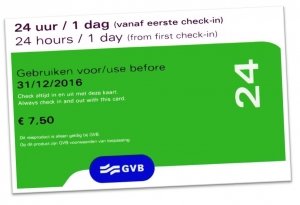 The single-day or multi-day tickets that are available for the public transport system in Amsterdam are typically the best choices for visitors. These tickets allow unlimited use of the Metro (subway), GVB bus system, trams, as well as ferries for the entire period of validity (1 – 7 days).

These tickets are rather inexpensive for a European metropolitan city. For 2020 fares range between €5.30 and €8 a day, depending on period of validity

You can purchase these tickets online and upfront without additional fees via the English-language website of the authorised GVB ticket seller – click here –. You will not have to deal with ticket machines or the tariff system upon your arrival.

That saves time and nerves – after all, you will have better things to do in Amsterdam…

Want to join the discussion?
Feel free to contribute!