The Metro in Amsterdam is operated by a municipal public transport company, GVB, which is also responsible for the tram, bus, and ferries.

In this travel guide, you will find all important information for passengers and tips for using the metro in Amsterdam.

Most of the routes are not underground (picture: F.Heijnen, CC 2.0 license)

Tickets for public transport in Amsterdam:
Which ticket option is best for me?

Whether single ride via e-purse, also referred to as OV-card, all-day ticket, “I Amsterdam Card”, or “Amsterdam Travel Card”, you will find detailed information for all, as well as current fares here.

It allows you to quickly and easily find the right ticket option for your stay in Amsterdam. Researching all options upfront and knowing which ticket option works best for you, will save you money and time after arrival and prevent stressful situations.

Our advice – when you don’t want to deal with the tariff system and ticket machines: 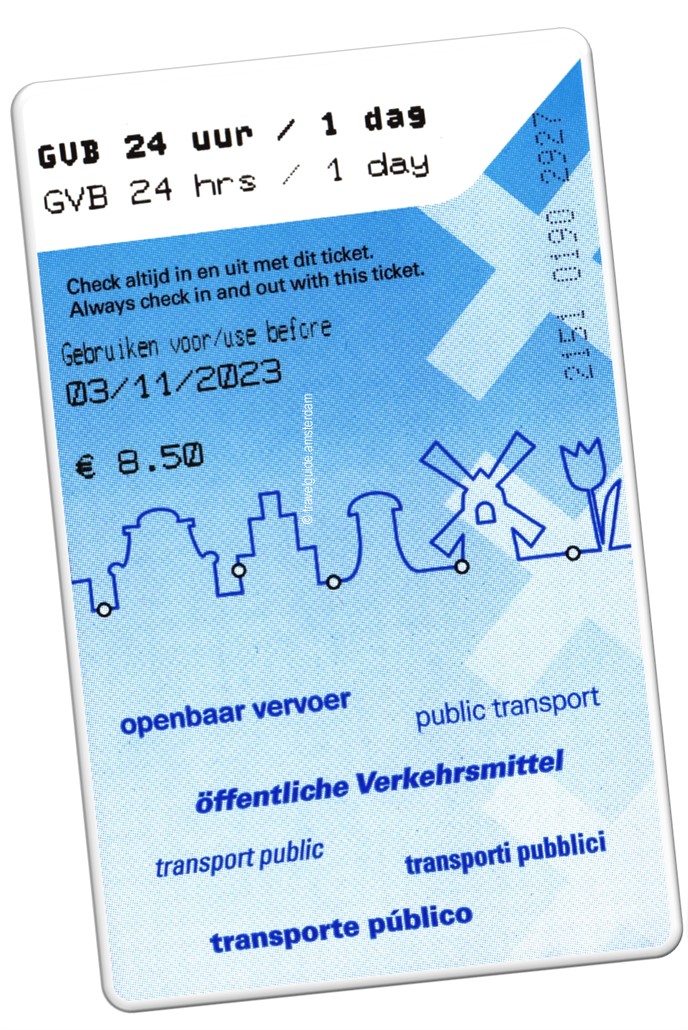 The single-day or multi-day tickets that are available for the public transport system in Amsterdam are typically the best choices for visitors.

These tickets allow unlimited use of the Metro (subway), GVB bus system, trams, as well as ferries for the entire period of validity (1 – 7 days).

These tickets are rather inexpensive for a European metropolitan city. For 2023 fares range between €5.85 and €9 a day, depending on period of validity.

You can purchase these tickets online before your trip without additional fees via the website of the authorised GVB ticket seller – click here –. You will not have to deal with ticket machines or the tariff system upon your arrival.

That saves time and nerves – after all, you will have better things to do in Amsterdam…

The metro in Amsterdam currently (as of 2023) consists of five lines and 59 stops. The Amsterdam Metro (Dutch: Amsterdamse metro) services the city as well as the surrounding communities of Diemen, Amstelveen, and Ouder-Amstel.

More than 50 metro lines in Amsterdam?

The numbering of the lines starts with 50, so at first glance the route network appears more complex than it actually is.

Four of the five lines have their starting point at Amsterdam Centraal station. 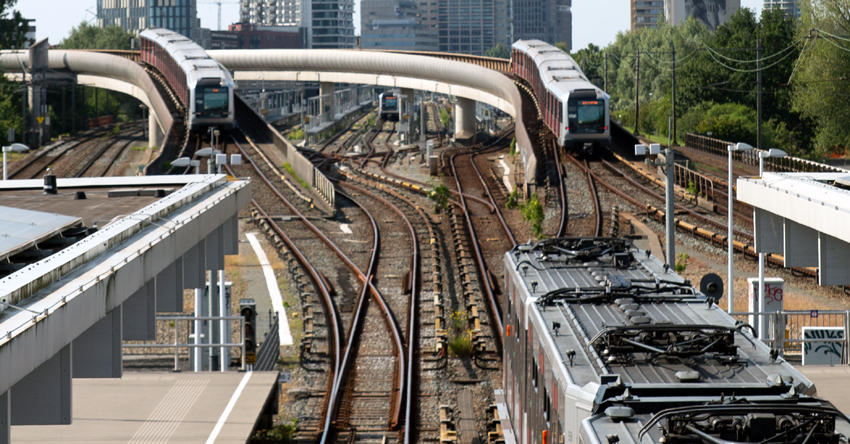 Amsterdam has a modern metro. In the outskirts of the city, the trains do not run underground. (Image: travelguide.amsterdam)

Line 50 connects the south-eastern and western districts of the city without crossing the city centre.

Line 50 is also called the Ringlijn (ring line). It is the only line that does not pass through Amsterdam Centraal station.

The final stops are “Isolatorweg” in the northwest and “Gein” in the southwest. With the stop “Bijlmer Arena” it also serves the well-known football stadium Johan Cruyff Arena.

Almost all stations on this line were built to a standard design. Most subway stations have a central platform, which passengers can access via escalators and an elevator. 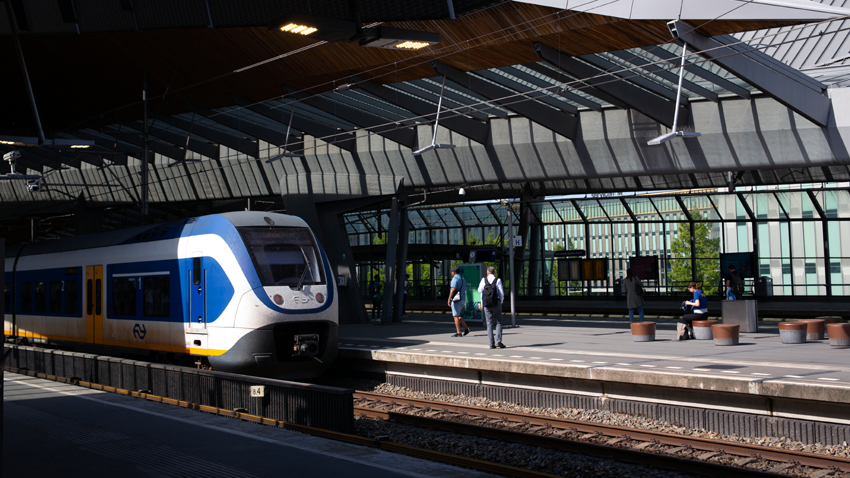 The “Bijlmer ArenA” stop of lines 50 and 54 is near the Johan Cruyff Arena (formerly Amsterdam Arena). It is also an important station for Dutch railways (Image: travelguide.amsterdam)

The new line 52 runs to Zuid station or north to Noord station.
Construction of metro line M52 (also Noord/Zuidlijn) started in 2002. It was completed in 2018. 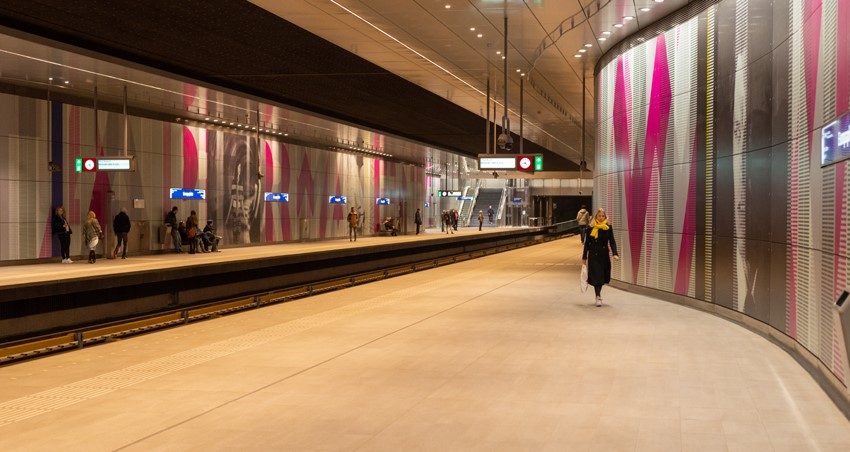 It runs from Zuid station northwards via Central Station to Noord station. A southbound extension of route 52 to Amsterdam Airport Schiphol is planned.

This makes it the first line to pass under the IJ (Zuiderzee estuary) through a tunnel, thus connecting the northern parts of the city to the metro network.

Lines 53 and 54 provide a connection from the city centre to the areas of Diemen, Duivendrecht in the southeast. 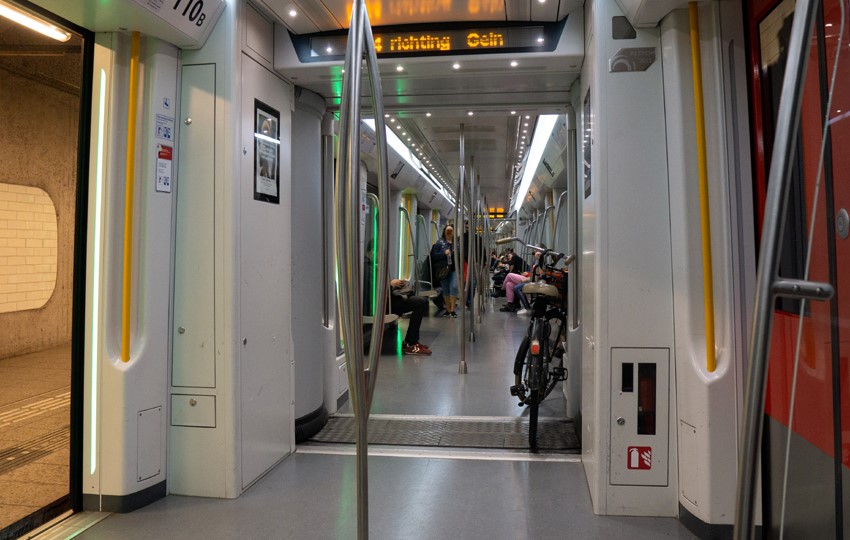 HISTORY OF THE METRO IN AMSTERDAM 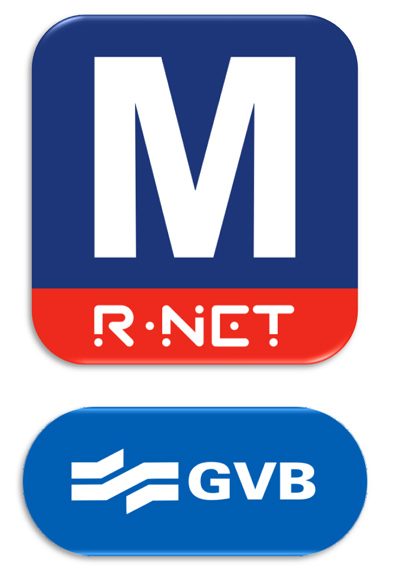 The logos of the Amsterdam Metro and its operating company, the GVB, often point to the nearest Metro stop.

Compared to other European metropolises such as London or Paris, the metro in Amsterdam is still very young.
The first ideas for a metro in Amsterdam already existed in the 1920s. But the economic crisis and the Second World War put a stop to these ideas.
Growing prosperity after the war and the associated motorisation of the population caused traffic problems to grow, and not only in Amsterdam. Many cities in Europe now began to implement the pre-war plans. At the end of the 1950s, for example, construction began on the metro in Lisbon.

Amsterdam began planning the metro in earnest in the 1960s. The first plan included a metro network with 4 lines that would replace many of the existing tram lines.
In 1970, construction began on the Oostlijn (East Line), which connects the city centre with the eastern districts of Bijlmermeer and Amstel. Here, part of the lines, especially outside the city centre, already ran above ground.
Since Amsterdam wanted to take a pioneering role as a city without car traffic, the metro network and the bicycle infrastructure were significantly expanded. In this way, Amsterdam has secured a leading position among European metropolises in the field of “mobility without cars”, also thanks to its modern metro.

How can dogs or pets ride on the Amsterdam Metro?

The local transport company GVB is very animal-friendly. Pets, including dogs, can ride on the metro for free. They must be in a bag or box, or on your lap, or on a short leash.

What are the rules for taking bicycles on the Amsterdam Metro?

Is there a metro (underground) in Amsterdam?

Yes, the metro in Amsterdam consists of five lines and 59 stations (as of 2023). A large part of the metro routes run above ground. That is why the metro is often confused with the tram.

How much does a Metro (subway) ticket cost in Amsterdam 2023?

There is no single ticket with a fixed price regardless of the route length. You can load credit onto the OV card (E-Purse) and then use it.
In 2023, the basic price will be €1.08 per trip plus 19.6 cents per kilometer driven.

It’s easier with the day ticket. This ticket gives you unlimited use of all GVB trams, city buses, metro (day and night) and ferries throughout Amsterdam.

Want to join the discussion?
Feel free to contribute!

This site uses cookies. By continuing to browse the site, you are agreeing to our use of cookies.

We may request cookies to be set on your device. We use cookies to let us know when you visit our websites, how you interact with us, to enrich your user experience, and to customize your relationship with our website.

Click on the different category headings to find out more. You can also change some of your preferences. Note that blocking some types of cookies may impact your experience on our websites and the services we are able to offer.

These cookies are strictly necessary to provide you with services available through our website and to use some of its features.

Because these cookies are strictly necessary to deliver the website, refuseing them will have impact how our site functions. You always can block or delete cookies by changing your browser settings and force blocking all cookies on this website. But this will always prompt you to accept/refuse cookies when revisiting our site.

We fully respect if you want to refuse cookies but to avoid asking you again and again kindly allow us to store a cookie for that. You are free to opt out any time or opt in for other cookies to get a better experience. If you refuse cookies we will remove all set cookies in our domain.

We provide you with a list of stored cookies on your computer in our domain so you can check what we stored. Due to security reasons we are not able to show or modify cookies from other domains. You can check these in your browser security settings.

These cookies collect information that is used either in aggregate form to help us understand how our website is being used or how effective our marketing campaigns are, or to help us customize our website and application for you in order to enhance your experience.

If you do not want that we track your visit to our site you can disable tracking in your browser here:

We also use different external services like Google Webfonts, Google Maps, and external Video providers. Since these providers may collect personal data like your IP address we allow you to block them here. Please be aware that this might heavily reduce the functionality and appearance of our site. Changes will take effect once you reload the page.

The following cookies are also needed - You can choose if you want to allow them: